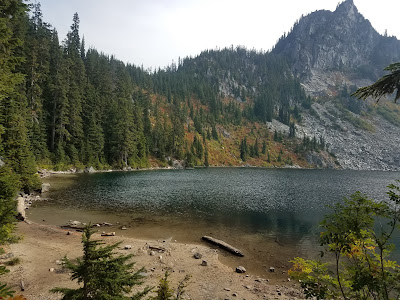 Got my annual Valhalla trek in this past weekend! I love hiking this trail every Fall. Lake Valhalla is my favorite accessible day hike for watching Autumn unfold. By mid September, the shrubs and trees are painted Rasta colors of red, orange, yellow, and green. There aren't many hikes that I like to do over and over again, just like there aren't many movies I own or want to repeat watch. I admit I love a new experience more than just about anything, so Valhalla is definitely special.

I was lucky enough to swindle my neighbor Kalee into joining me last minute even though she's nursing a knee injury. When we parked at the Smithbrook Trailhead just beyond Stevens Pass, I looked over and saw a very special little boy! My best friend Hazel used to nanny this insanely gifted, smart and soulful kid named Jonas. He and his Dad were getting ready to hike the same trail, so we started our journey with them. I tend to be awkward with kids, I suppose because I'm acutely aware that I'm missing the inherent "mommy button", but he is literally the coolest kid ever! Such a fun and random rendezvous. He was doing a 7 mile, 1600 ft. e.g. hike at age six, by the way. Stuntin'!

Lake Valhalla is nestled in the gap between Mount Lichtenberg and Mt McCausland of the Cascades. After about 2 miles, it intersects with the Pacific Crest Trail at Union Gap, so there are always a handful of stinky and smiley through hikers along the way. I shuddered a little at the thought of sleeping out there this late in the season. The air was already pretty chilly since the elevation caps out at over 5000 ft.: 6000 or more if you climb McCausland for the aerial lake view. Snow will probably be on the ground within 3-4 weeks.

I love that so many hikes in Washington are named after Viking-era mythology. I don't know if this common, since I haven't done toooo much hiking outside of my home state. If you read my post about the Enchantments, you know that the pinnacle point of that through trail is Asgard Pass: named after the Gods' celestial fortress. In Nordic mythology, Valhalla is a grand hall within Asgard where the God Odin houses slain warriors. It's essentially a warrior's purgatory, where Odin keeps these spirits for later use in his epic Ragnarok doomsday battle. The story goes that all day every day these slain men engage in battle against each other until evening falls and their wounds are healed and their health restored. Then they eat and drink and party to their hearts content under a golden roof.

The root word Valhöll translates to “the hall of the fallen,” and is related to Valhallr, “the rock of the fallen,” a namesake title granted to certain hills and rocks in Sweden where the dead were thought to retreat after life.

Watching the summer fizz out and come to an end along the hillsides and ridges of this hike was beautiful. Autumn is ebbing it's way in steadily and surely. Many trees were displaying orange and yellow underbellies, and the entire gap was shifting slowly towards a more warm, red tone rather than cool greys and greens of Summer. I adore living in a place that reflects true Seasons, where each quarter is markedly different than the one that came before. Despite it all, this is one of the greatest things about the PNW. The death and resurrection of each Season is as intriguing as the light and dark of sunrise and sunset. It's mystical and mythological at once. These changes in nature seem easier and lighter than so many others we face in life since they are dependable in their timing and reliable in their inevitability.