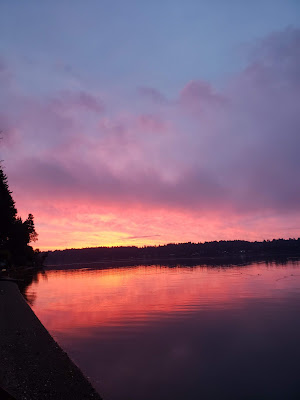 The South Eld Inlet bestowed me with a victorious send off in the form of a glorious final sunrise. Making the choice to leave something good is always an interesting experience- be it home, job, relationship. Sometimes we feel in our bones that something else, something grander or more precious, awaits us. When the siren song of the other beckons, you simply must listen.

"The heart has reasons that reason does not understand."

I was held so tenderly by my life on Steamboat the past ~4 years. Somehow I stumbled into a niche community that immediately wrapped its arms around me. Landlords who became family, friends made effortlessly, neighborhood baristas who cried with me when my pup passed and saved boxes for my move. My little bungalow by the water was the antithesis of my former life in the city and saying Goodbye to it all was much harder than expected when the time came. 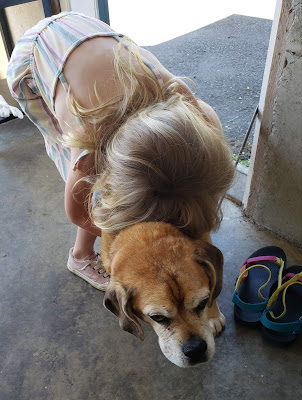 Moving is an emotional experience whether we go willingly or not. I'm trying to welcome the sheer discomfort that comes with inhabiting a new city and home. Honoring the curiosity that led me out of my bubble and the desire for change that propelled me here. It's been a week of both thrill and sadness, certainly some tears.

My friend reminded me that I am in the liminal space that accompanies life transitions. The word liminality is derived from the Latin word limen, meaning threshold. Perhaps author and Friar Richard Rohr defined it best: "where we are betwixt and between the familiar and the completely unknown." Suspended on the cusp of something new that you can sense but not quite see. Every great journey requires these in-betweens as rites of passage. Nothing to do now but bow at the alter of ambiguity.

Inertia is the tendency to do nothing or remain unchanged. Seeking external forces that shift us into motion is essential to a life well lived. Life often feels better when you're in motion. Stillness is promoted a lot these days as the foundation of peace, but for some of us stillness straddles a fine line with inertia. Too much of it can engender overthinking and disembodiment.

Liminality, though uncomfortable to the point of painful, is charged with intensity. Pushing our way out of a rut or leaping from a safety net invites opportunities for future synchronicity and unknown blessings. We stand on the threshold of the next great adventure, the next great discovery. Perhaps the next loss or failure, but certainly not stagnation.

As Einstein informed, energy and matter are essentially equivalent; two sides of the same coin. But if you could choose one, which would you be? I for one would be energy. Energy doesn't sit still, though matter may.

“I want to keep walking away from the person I was a moment ago, because a mind was made to figure things out, not to read the same page recurrently.”

And a past entry on liminal space, which also happened to be penned around New Years. Is it coincidence? Hmmm...is it ever? 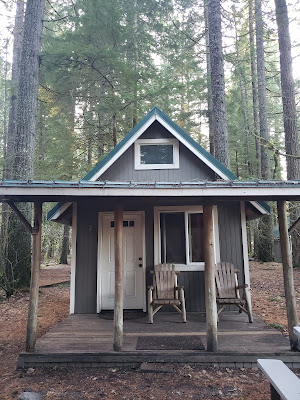 Recently I spent a weekend in Cougar, South of Mt. St. Helens, in an area I've only driven through. Four of us stayed in cozy propane powered cabins that would have brought tears to ol' Hank Hill's eyes. Lights, heat, stove, hot water - all powered by propane, and incredibly effectively. I was expecting a rustic and chilly abode but it was much more like glamping.

While sitting around the fire our first night, Claire suggested we take on the Ape Canyon trail the next day. A new trail for all four of us, plus Mango the dog, so why the hell not? We didn't have internet, no AllTrails or WTA to check for recent conditions or reports, but we had Claire's uncanny memory for directions and a hiking book she brought with her.

Thus, I didn't know until a later Googling of the trail specs that Ape Canyon was named after a supposed Sasquatch sighting in 1924. Regretfully, we saw only hare and elk tracks in the snow. The area does have a perceptibly haunting quality to it, though. We hiked until the sun began to set and coyotes howled somewhere in the distance- that time when light stops filtering through the trees and you sense predators awakening out of daytime slumber. There's a particular sensation to the woods at 4pm in Winter- hard to describe, aside from the way your senses heighten in response.

[Note: if Sasquatch lore amuses or intrigues you, I highly recommend the movie The Dark Divide with David Cross] 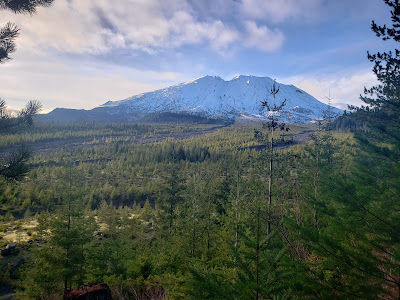 The Ape Canyon trail begins alongside the Muddy River lahar flow, which is lined with new growth in every shade of green. After a few miles it transitions into one of the only old growth areas left at St. Helens post-blast. Gigantic pine cones littered the ground, and somewhere around mile 4 we began to encounter snow. Claire's book put the trail at 9.6 miles round trip, but most sites I looked at later said 11-11.2. It was a wooded, quiet, and somewhat overcast climb to the top. Once we got within about a mile of Ape Canyon the clouds began to part as if for us alone, exposing stunning mountain views. 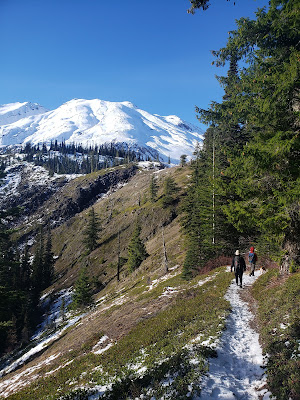 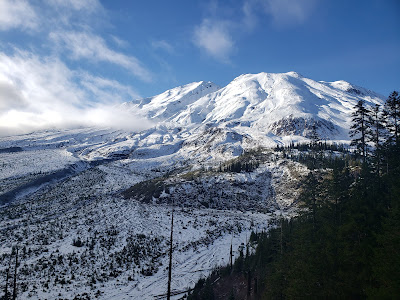 Eventually the trail emerged out of the forest and onto a wide plain of soft yet jutting volcanic stone. The canyon was finally in view, along with Helens, Rainier, Adams, and a volcanic monitoring station. A fair reminder that we were in fact recreating on an active stratovolcano, hiking earth that erupted a mere 40 years ago. The sky screamed blue. It was frigid but fantastic, and fully worth the climb.

We stopped to devour sandwiches before turning back down the way we came. The trail's official end is about .2 miles further where it intersects with the Loowit trail, which circumnavigates St. Helens.

FR83 closes annually on December 1st, so we made it just in time to explore the area. I've always been someone who leans into over-preparedness for a false sense of comfort, but saying yes to trails and places that I know nothing about is becoming more common practice. Like my trip to Idaho this Summer, going after something with close to zero expectation makes it pretty easy to be impressed and delighted. 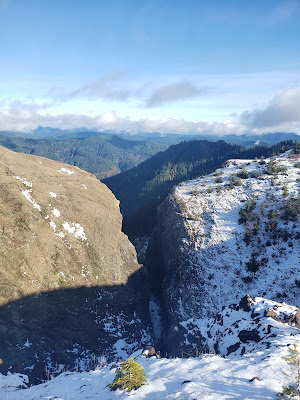 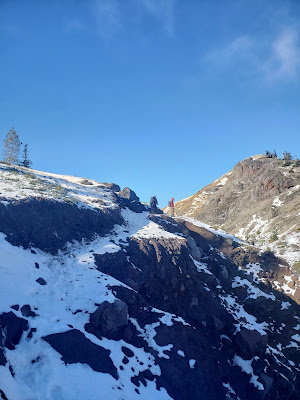 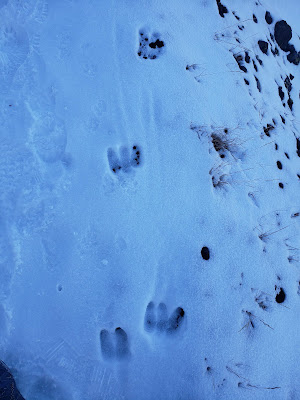 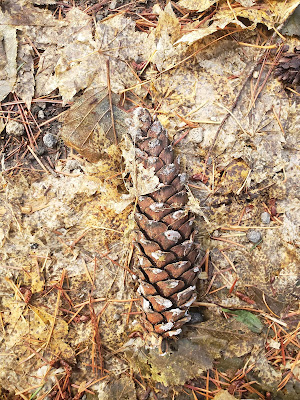